Fortunately, Cisco Netherlands organized another innovation tour for Cisco Partners in the week before Cisco Live US in San Diego. This time the innovation tour spanned two days and included visits to four tech companies in Sillicon Valley. In this blog I’d like to share my experiences of the tour. 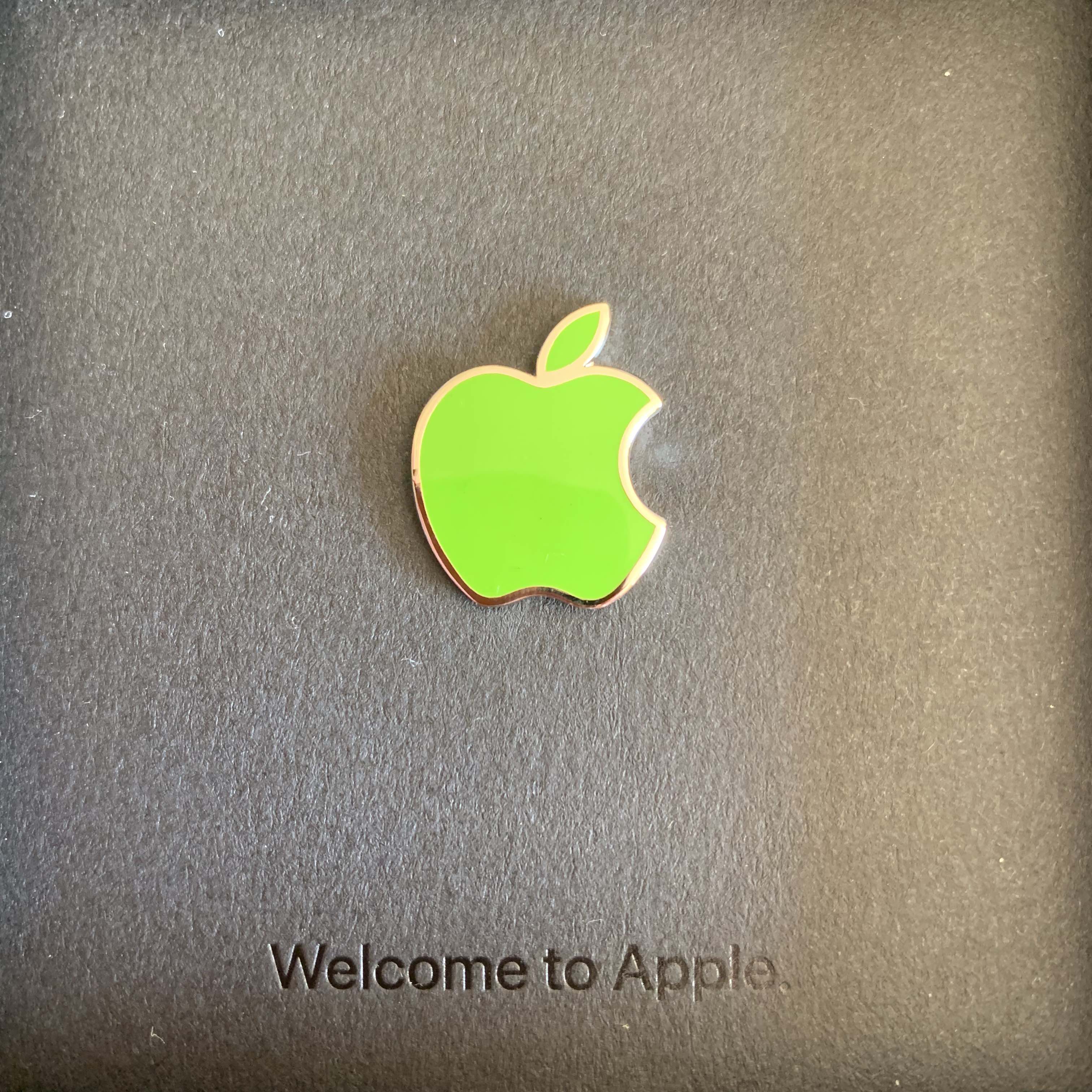 After a bit of a delayed start (well, Apple Park is huge!), we were welcomed by Apple in an environment quite

There were a number of briefings, which were all very interesting. One was on how Apple is working with partners in its ecosystem, that not only includes Cisco on the networking side, but also a huge partnership with IBM on Swift and App developments. Another session was on how Apple sees the future, their role in the enterprise and they several aspects of which were related to privacy, the announcements made at WWDC2019 earlier that week.

What really stood out for me was the way they demonstrated their new VoiceControl options for those that have disabilities. The video touched me, as I thought back to my father who died of A.L.S. in 2009, and how he might have used that (for a short period of time, as his speech deteriorated too). Besides this video, the capabilities of endpoint management that Apple can offer (both with and without supervised mode) were demonstrated, including a short briefing on the WWDC2019 announcement of having two distinct data-profiles on your iPhone. Of course, I already knew that a lot is possible for endpoint management on Apple devices, but the demo made clear that quite some nice new features have been introduced.

After the formal briefing sessions, we were invited to Apple’s visitor center, right across Apple Park. We got a tour through the visitor center, how it mirrors the new Apple Park Campus design and besides an awesome Augmented Reality app (see image below, thanks to Fred Spikker), the guide also explained how Apple park can already be so lush and green, while the building is only 2 years old! Steve Jobs and Jony Ive wanted to have employees working at Apple Park a full-grown experience, so they grew trees in other locations and moved them after the construction was finished! 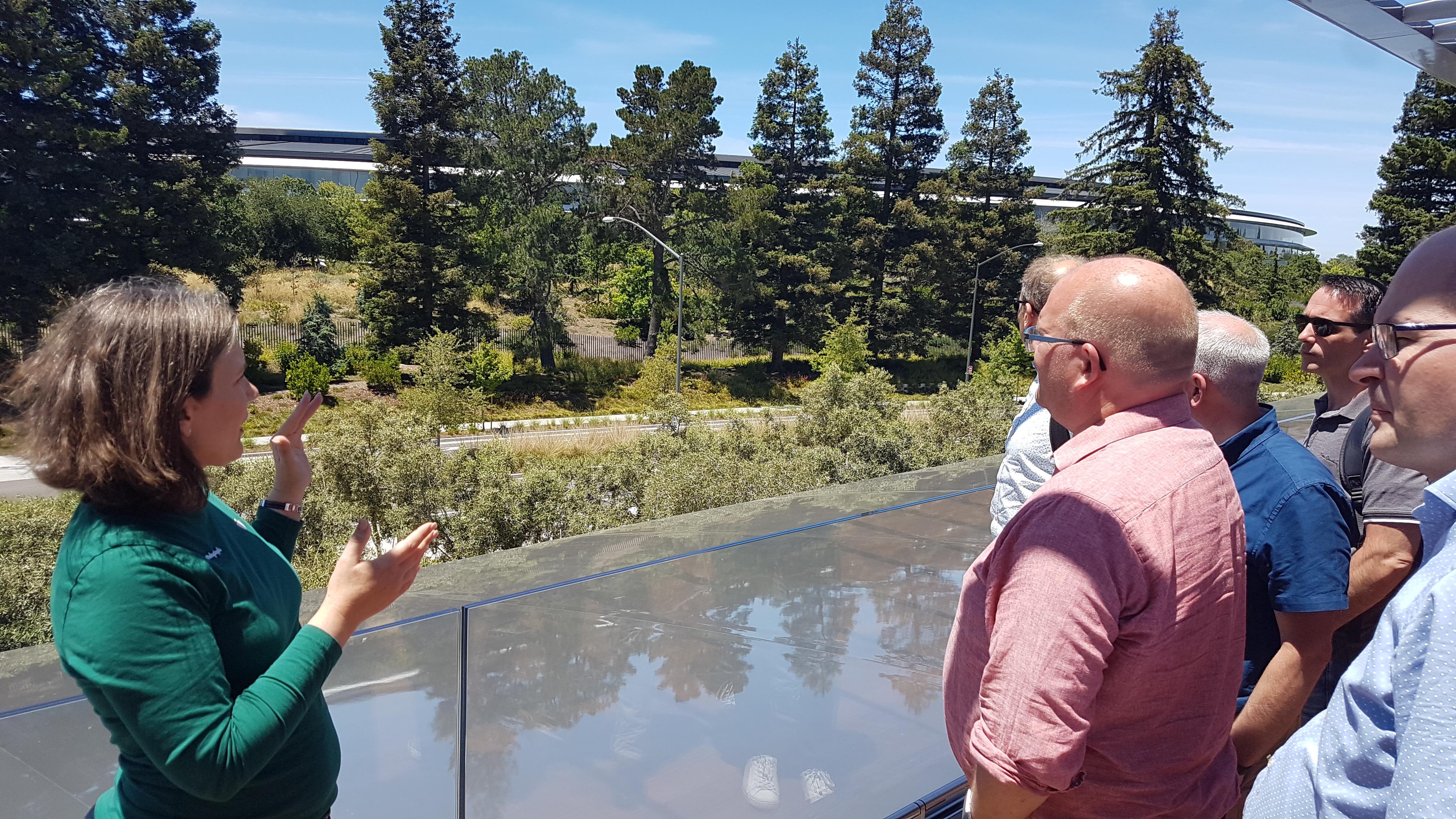 But what really stood out to me was not the amazing design of the building itself, but the sustainability of the building. The building has zero CO2 (even negative footprint, e.g. reducing) by large solar panels for power generation, but also the airflow of the cool San Francisco breeze is used to cool the building. They only need Airconditioning 3 months a year, the rest of the time, the wind is used for cooling. And yes, it was comfortable inside! 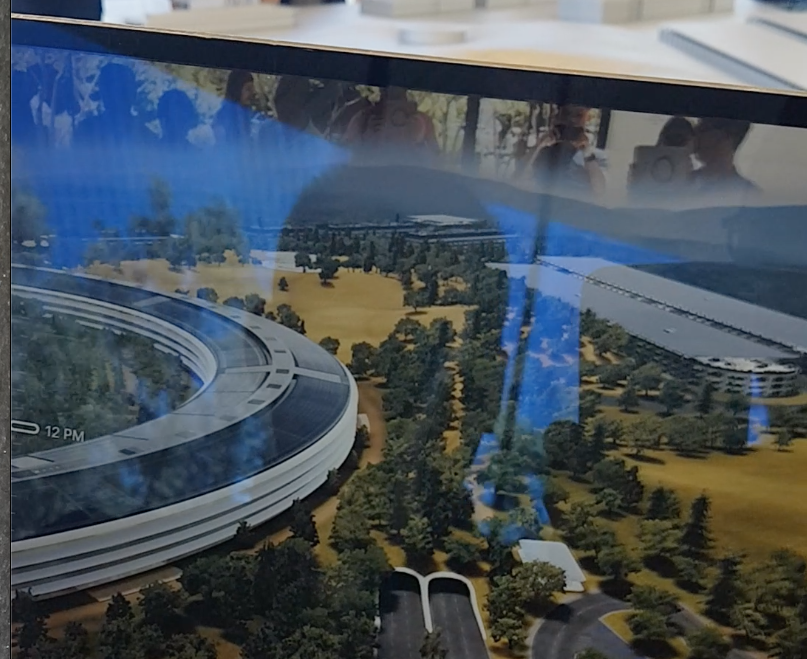 Our second visit on the first day was to Meraki HQ in San Francisco. And although we arrived late, we were welcomed at the Meraki office.

The session with Meraki and the tour around their office was interesting. Meraki still has a typical valley-startup vibe to it, which is acknowledged by the fact that personal packages can be delivered (or picked up) at the office, food provided by Meraki, dynamic office environments and not to forget, you can bring your dog along.

I don’t know what I can publicly share on the content of the sessions, but Meraki is really integrating more with Cisco Systems on several fields, such as integration with SDA and of course network programmability. Meraki of course already supported API’s, but they now have an API first strategy, so in time, everything you see in the web interface is effectively an API call to the backend.

A visit to Cisco itself can of course not be forgotten. Day 2 started with a visit to Cisco’s Customer Experience Center in San Jose. And besides bumping into Chuck Robbins when walking through the center, we had some very interesting briefings.

The first briefing detailed the change that Cisco is foreseeing in the partnership. With Cisco profiling more as a software company, the partnership is changing. Don’t worry, Cisco still strongly believes and is committed to the partner model, but a different type of partners emerge besides just supplying the hardware boxes. It is part of the digital transformation and the journey a lot of organizations are on.

The second briefing was very interesting. It was presented by Hugo Latapie, one of the experts on Artificial Intelligence and Machine Learning. What I truly loved about it is that he didn’t only demonstrate what can be done with deep fusion reasoning, but also the drawbacks AI/ML. There are plenty of samples on the Internet where an image, used for learning, can be changed in such a way that a completely different object is recognized.

The last briefing was with Edwin Paalvast. As he is also Dutch, his briefing was in Dutch and he shared his vision on the challenges many enterprises face, and how Cisco can support them. And typical Dutch, we had a discussion on that vision and challenged one and another. I must say, I did recognise the problems he described and see them in my own environment too. And although the dot on the horizon is clear, the road to it is still a journey with a lot of hurdles to take in.

And well, we were at the customer experience center, so we also received a very nice demo on how Cisco’s security portfolio supports the enterprise and the world in a more secure environment.

The last company visit of this innovation tour was with Nvidia, in their brand new headquarters. What a beautiful building and what a difference with Meraki and the other companies too.

NVidia welcomed us with a reference to an article that states that businesses in The Netherlands are, according to research, leading the way in applying Artificial Intelligence. And that not only the large corporations use them.

After this quick intro, the four technology pillars of NVidia (Gaming, Professional Visualization, Artificial Intelligence, and Self-Driving Cars) were explained.

All these four pillars are driven by the same common technology, also known as GPU and how the innovation and evolution of the GPU have brought enormous computational power to different sectors.

The briefing also detailed how AI has changed the world around us already, with AI driving suggestions within Search Engines, Image Recognition other industrial fields. After a short explanation on the Cisco-NVIDIA partnership (where you can get these amazing GPU’s in appliance for VDI deployments or GPU-based machine learning), the power of GPU’s for AI were demonstrated a number of verticals.

What I really liked about the story of Nvidia is their single platform strategy on GPU’s. Nvidia has a Deep Learning Institute that teaches organizations (and individuals) on how you use deep learning to solve complex problems. Everybody can take sessions within this institute and get started on GPU-based AI/Machine learning. And the single platform strategy means that you can start coding solutions yourself on a developer board, such as the Jetson Nano ($99) or Jetson TX2 (twice the power) and you can then scale that up to GPU-based cloud services or an on-prem solution without changing your code.
And yes, within the networking industry, we are only just getting started programming the network, imagine what you can do with your programming skills on these GPU’s. There is a whole new world out there. I bought one of these developer kits to see how I can use GPU computational power to solve networking problems…

After the briefing itself, we were showed around NVidia’s Customer Experience Center. In that center, they have demonstrations on all the things you can do with GPU’s, from image-learning at a much larger pace, to a visualized photo of a woman, which is not a real person (freaky), to the possibilities of creating a 3D cut of x-ray visions in the medical industry, or a short trailer of a completely computer-rendered movie, very realistic. 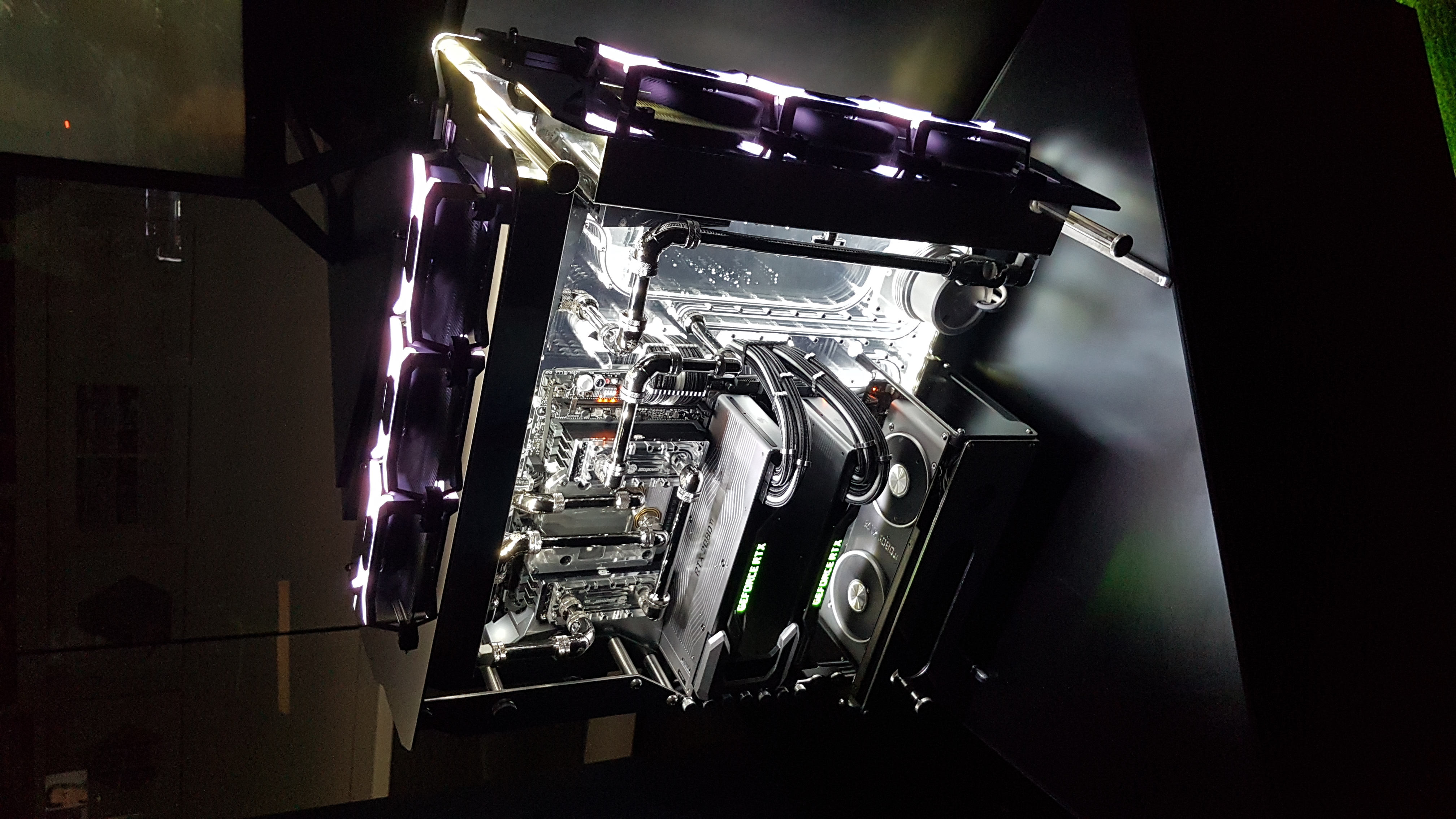 It is quite difficult to provide a summary of this year’s innovation tour. It was jam-packed and although each visited company is technology-focused, they have their own culture, vision, and strategy.

And throughout these differences, there is a thin red lining that touches all these companies, whether they are one of the thought leaders or applying them. And that is that technology is changing our lives in ways that we could not fathom five years ago. AI and ML are technologies that are here to stay, there are some drawbacks (like telling what is real and what is not, or that the quality of learning is poor, and some philosophical and social discussions that really need to take place). The general goal of this technology is for the good and to improve the quality of life.

If I had to summarize the tour and things I saw and learned, I would use the following word.

(I really hope that 2020 will also have an Innovation Tour!)