So I am in the lucky position that in the past few weeks I’ve been working with the DNA-Center solution in different ways in a primarily automation focused project. One of the new philosophies of the Cisco DNA-C BU is to deliver updates more frequently and in a micro-update based strategy. E.g. if a package has a bug, only that package can be updated, on the fly. So DNA-Center needs to have a connection to the Internet. And it’s time to share my experiences.

DNA-Center is essentially based on the container-based platform of APIC-EM. In this platform, grapevine has been replaced with a different container-based infrastructure platform named maglev. The figure below gives a schematic approach on how the DNA-C appliance is essentially structured. Maglev introduces the possiblilty to cluster multiple DNA-C appliances for a HA solution. For HA you do need three DNA-C appliances with the primary reason that the integrity of the data (NDP) and config can be validated as there are still two copies, a common practice also seen in HyperFlex or vSAN deployments.

So in essence, the DNAC solution consists of four different layers , being

Ubuntu based Appliance This is the core OS upon which the container platform (with docker and kubernetes) is running. In general, you shouldn’t touch the OS, except for a minor config thing which I’ll cover later

System Package Although it is called a package, it is the primary underlay for all other DNAC packages and applications, such as automation, path-trace, network visibility, etc, are running and talking to. You could see this as the hypervisor.

Application packages This is the core of the DNAC appliance, it contains all the applications, services, packages and intelligence that you can use. Packages can contain different microservices that provide some part of the intelligence, for example a syslog collector in assurance that receives syslog data and parses it. Or the SDA Lan Automation is part of a package and contains different micro-apps that all can talk with each other

User interface I’ve drawn the user interface as a separate layer, as I suspect that the ui modules in essence call api’s of the application packages so that a consistent UI can be created and other developers can reuse the API’s for their own applications.

Updating DNAC system and applications is really easy. Just go to the DNAC web interface, click on the cog-wheel, select System Settings and then “App management”. 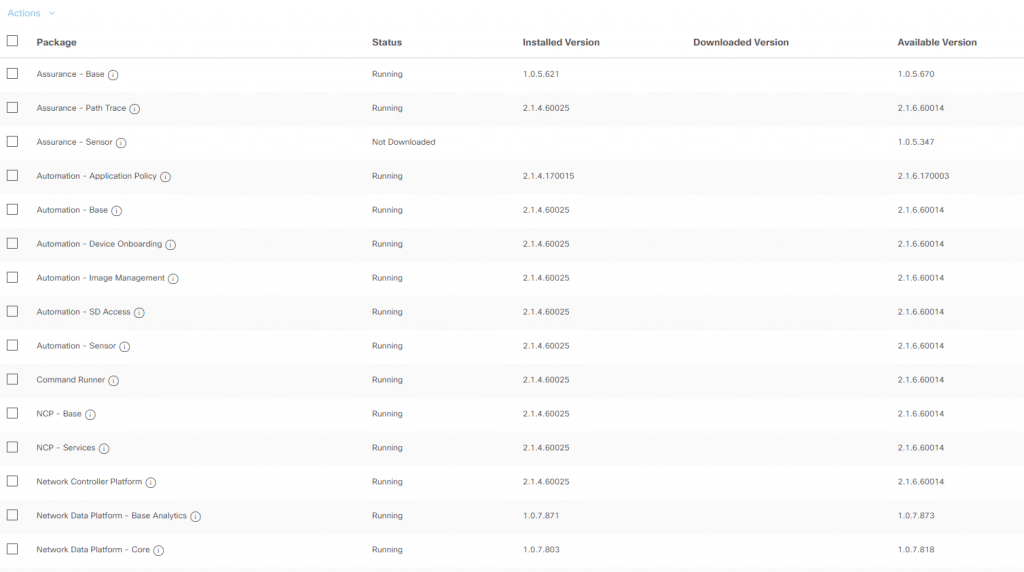 And there you’ll see which applications you have running in DNAC and which applications have updates.  You might see that DNAC has already checked for you if there are updates available, just like your computer does. So DNAC checks periodically for updates. That could come in handy..

Click on the checkbox left of the application and click download, after downloading you can install the new package. But WAIT!! According to the release notes, some packages need to be downloaded en installed before others, so ALWAYS check the release notes.

Of course, sometimes things don’t go as well as expected and you need to do some troubleshooting. The following tips might help you further along the road.

If you have DNAC behind a strict firewall, like a next-gen firewall, make sure you allow DNAC to connect the following URL’s to succesfully download software packages and provide feedback

So make sure your next-gen firewall allows these url’s and domains to pass for DNAC.

And what would happen if your DNAC server is behind a proxy, and you didn’t configure one..  Well, your download of the package gets stuck in downloading. It is a known issue.
Fortunately, Console access comes into the rescue for that.

Login to the DNAC console via SSH to the DNAC IP address on port 2222. Login with maglev and the admin password. Now that you are in maglev, execute the following command
$ maglev catalog package display
maglev-1 [main - https://kong-frontend.maglev-system.svc.cluster.local:443]

This will delete the package download for you and if you do this for each package, you’re going to cleanup before you can do a system package install. The output would then become

Now, if you run into the situation that your DNAC server is behind a proxy, you can configure a proxy server within maglev. I didn’t find an option to specify a username and password, so if corporate IT requires authentication, you need to talk with them and ask for exceptions of the URLs that I provided earlier.

!!Now a very very important caution here, you are logging into the console of your DNAC appliance and executing superuser commands. This can seriously break an appliance. And I mean seriously break it. So use these at your own risk and make sure you know what you’re doing. Information is provided as-is and no claim can be made. !!

As DNAC runs on Ubuntu, you can use standard linux tools like grep and less to search for problems. I found the following commands quite usefull in troubleshooting

Did you remember the four layers I described earlier in this post? Well, a DNAC system update is actually also a package, but you cannot delete it with maglev command. Also, as this is a different layer in the schematic approach, it does NOT use the maglev proxy settings. It is actually a docker process that does this communication, and that requires a different configuration file. At the install I was working on, the proxy configuration for docker was missing. It could be that this file is only created when you specify a proxy during first time setup. Or it was something else. The key thing is that the proxy config is stored in two places, within maglev and within a docker config file.

So again a caution, you are changing a system level file and you MUST know what you’re doing. Make sure you keep track of your changes and know how to connect (CIMC) and recover if things go bad..

Oh and last but not least, remember that DNAC checks automatically for new versions and will try to download those packages for you. So they can get “stuck” again, also after a reboot. So be sure to check if a package is stuck in a download frequently and delete them if needed.

In summary, updating DNAC should be a simple and easy process. But as with any modern enterprise, security measurements need to be taken into account and you need to configure that proxy correctly and check.

Also, although you can now more rapidly update your DNAC software, you should follow your own procedures with regards to changes and executing updates. To me, that is reading release notes, reading upgrade guides, backing up DNAC, testing the upgrade in a test environment, allocate a service window and do the update in a planned way. And, according to more and more best practices, wait with major updates until it’s proven stable enough for production…